Chavez invested Venezuela’s oil wealth into social programs including state-run food markets, cash benefits for poor families, free health clinics and education programs. But those gains were meager compared with the spectacular construction projects that oil riches spurred in glittering Middle Eastern cities, including the world’s tallest building in Dubai and plans for branches of the Louvre and Guggenheim museums in Abu Dhabi.

That’s right: Chavez squandered his nation’s oil money on healthcare, education and nutrition when he could have been building the world’s tallest building or his own branch of the Louvre. What kind of monster has priorities like that?

In case you’re curious about what kind of results this kooky agenda had, here’s a chart (NACLA, 10/8/12) based on World Bank poverty stats–showing the proportion of Venezuelans living on less than $2 a day falling from 35 percent to 13 percent over three years. (For comparison purposes, there’s a similar stat for Brazil, which made substantial but less dramatic progress against poverty over the same time period.)

Of course, during this time, the number of Venezuelans living in the world’s tallest building went from 0 percent to 0 percent, while the number of copies of the Mona Lisa remained flat, at none. So you have to say that Chavez’s presidency was overall pretty disappointing–at least by AP‘s standards.

[Obama] should also  understand the systematic, violent repression here, the kind that apparently killed a 14-year-old boy, Ali al-Sheikh, and continues to torment his family.Ali grew up here in Sitra, a collection of poor villages far from the gleaming bank towers of Bahrain’s skyline. Almost every day pro-democracy protests still bubble up in Sitra, and even when they are completely peaceful they are crushed with a barrage of American-made tear gas.

People here admire much about America and welcomed me into their homes, but there is also anger that the tear gas shells that they sweep off the streets each morning are made by a Pennsylvania company, NonLethal Technologies. It is a private company that declined to comment, but the American government grants it a license for these exports — and every shell fired undermines our image.

In August, Ali joined one of the protests. A policeman fired a shell at Ali from less than 15 feet away, according to the account of the family and human-rights groups. The shell apparently hit the boy in the back of the neck, and he died almost immediately, a couple of minutes’ walk from his home.

The government claims that the bruise was “inconsistent” with a blow from a tear gas grenade. Frankly, I’ve seen the Bahrain authorities lie so much that I don’t credit their denial. (….)

The police have continued to persecute Ali’s family. For starters, riot policemen fired tear gas at the boy’s funeral, villagers say.The police summoned Jawad for interrogation, most recently this month. He fears he will be fired from his job in the Ministry of Electricity.

Mourners regularly leave flowers and photos of Ali on his grave, which is in a vacant lot near the home. Perhaps because some messages call him a martyr, the riot police come regularly and smash the pictures and throw away the flowers. The family has not purchased a headstone yet, for fear that the police will destroy it.

The repression is ubiquitous. Consider Zainab al-Khawaja, 28, whose husband and father are both in prison and have been tortured for pro-democracy activities, according to human rights reports. Police officers have threatened to cut off Khawaja’s tongue, she told me, and they broke her father’s heart by falsely telling him that she had been shipped to Saudi Arabia to be raped and tortured. She braved the risks by talking to me about this last week — before she was arrested too.

Khawaja earned her college degree in Wisconsin. She was sitting peacefully protesting in a traffic circle when the police attacked her. First they fired tear gas grenades next to her, and then handcuffed her and dragged her away — sometimes slapping and hitting her as video cameras rolled. The Bahrain Center for Human Rights says that she was beaten more at the police station.

Khawaja is tough as nails, and when we walked alongside demonstrations together, she seemed unbothered by tear gas that left me blinded and coughing. But she worried about her 2-year-old daughter, Jude. And one time as we were driving back from visiting a family whose baby had just died, possibly because so much tear gas had been fired in the neighborhood, Khawaja began crying. “I think I’m losing it,” she said. “It all just gets to me.”

Maybe if you have a few atoms of humanity left in you, it might help you remove that veil off your conscience and see things for what they are:

This incident – amongst hundreds of others currently being meted out to the majority of villages in this country – should be independently investigated and the officers implicated and their masters who are doing nothing to stop this must be made to account for their actions and be punished. The government who oversees this situation should be summarily dismissed of course and with haste. Nothing else would do if that illusive “new page” is to become a reality. 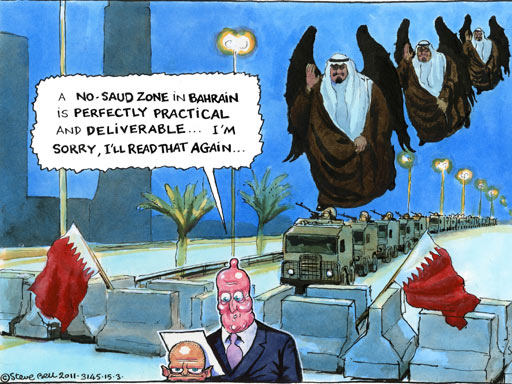